I was never interested in cooking as a child. Growing up, all of us had to be in the kitchen helping my mom when it was time to cook but I always managed to escape. I would be in the living room watching TV. My mom would call me or send my siblings for me and I would say, “I’m coming” but not move. Then after several attempts of trying to get me into the kitchen, I would eventually go, but I wouldn’t be of much help. I would poke at things, ask about the organs of a fish or what ever was being cooked, stir what was on the fire, and do my favorite part of cooking, taste “for salt” then return to the living room. The few times I may have had any interest was when it came to baking, but that was probably just because I was looking forward to having a sugary treat.

My family would tease me about my lack of interest in cooking and ask what I would do when I get married. Isn’t it funny how no one ever asks how you would take care of yourself when you leave home? And what about this husband, shouldn’t he be taking care of himself before a wife comes around? I understand culturally a lot of people move from their parents home into their husband’s but not my family, we all went to school abroad. Anyway, my response to this question was my husband would cook for me. Then they would all laugh (at me) and my aunt would say I would marry a white man because she doesn’t know of any African man who would be okay with that arrangement. Either way, I was still content with not knowing how to cook.

It wasn’t until towards the end of my sophomore year in college that I started to gain an interest in cooking. Before that almost every thing I cooked was an experiment. I remember once when I visited my brother over a school break, I made “fried rice” and put so many different spices in it. That day after my brother came home from work, he told me he took some of the rice for lunch and when he opened the container, one of his coworkers came by and asked, “who sprayed perfume?” I had a good laugh and the lesson from this experiment: sometimes less is more. Well at least it was still edible, I’ll give myself that.

But going back to the end of my sophomore year, I was going to be moving off campus into an apartment with some friends and I got really excited about making my own meals. Part of this excitement was also because I had gained freshmen 15 (or more like 20) and after this had been pointed out to me over the summer by my family, I got very health conscious my sophomore year and started counting calories. Obsessively. But that story is for another blog post. Either way, being more in control of what was going into my food was something I looked forward to.

I started collecting recipes online, I unearthed the recipes that I had collected from my mother’s cookbooks and notes before leaving for college, and I got obsessed with the food network and the Cooking Channel. I would try to make low calorie versions of the foods I liked, even desserts. The summer after my sophomore year, I went to Senegal to visit my parents and sister. I was still kind of rusty but my parents were surprised by my sudden interest in cooking. Often my younger sister and I will come up with things that we wanted to make and go get ingredients. To make things even better, I had some how stumbled upon an online culinary school called Rouxbe and they were offering a free trial for about a month. Being the cheapo that I am, I spent the month collecting all the knowledge I could from the site and saving recipes in time to cancel my membership before my card got charged. From Rouxbe I learned about the different knives and how to use them, I learned about brining and I learned other valuable cooking skills. By the time I moved into my apartment, I was ready to cook for myself.

After moving into my apartment my junior year, I was always cooking. One would think I was majoring in the culinary arts. I made things from English muffins, to perogies, to whole grilled fish. It was kind of crazy when I think back to it but I learned a lot. When I went home for the holidays, my family was shocked especially when I decided to make the whole Christmas and New Years dinners by myself. I love Thanksgiving food but never really got to spend Thanksgiving with my family so I wanted to make something similar. I made a menu then asked everyone if they were fine with it. Then I made everything myself (I know, I was completely nuts), except the Cameroonian dishes that my mom included. That was great and all but I also created a tradition that I now have to uphold every single holiday. I learned my lesson though and I started asking for help. 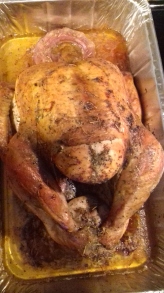 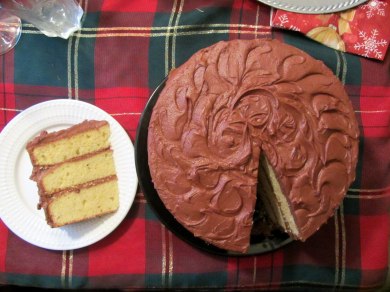 Now I am not as obsessed with cooking as I was back then but I still love it. I love creating new recipes and testing new ideas. Mostly I love to eat so I’ll do what it takes. The one thing I missed out on from not being interested in cooking earlier is learning Cameroonian dishes. I wish I learned to cook some of them while I was still living with my mother because now I find myself calling to double check Cameroonian recipes with her often. I do not have any regrets about those days of playing or watching TV though.

I wanted to share this story so you guys get an idea of why I call myself a “chef” (imposter!) but also to hopefully inspire any of you reading this who wants to improve your cooking skills. I hope you pick up some ingredients and give it a go. Even if your food starts out smelling like perfume, the more you cook the better it will get.